Important groups of „soil mites“ are moss mites (Oribata) and gamasina mites (Gamasina). For both groups I am serving identification on species level. 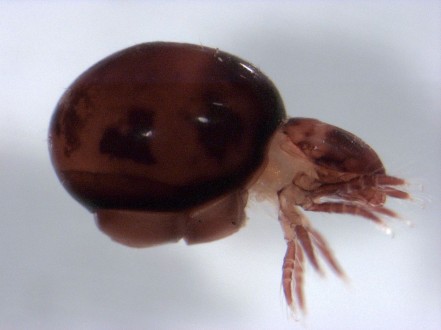 I identify Oribatida of agricultural and grassland sites on species level. These sites are often dominated by species like Tectocepheus velatus sarekensis oder Opiella nova which are resistant against mechanical disturbances.

Oribatida are characterized by their strong sclerotisation and feed on a wide range of food sources like litter and soil fungi. However, some oribatid species also feed on other soil animals as nematodes.

In contrast to Oribatida, Gamasina are typical predators feeding on several soil fauna groups as Collembola and Nematoda. Large Gamasina taxa as the genus Pergamasus feed on other soil arthropods (e.g. Collembola)